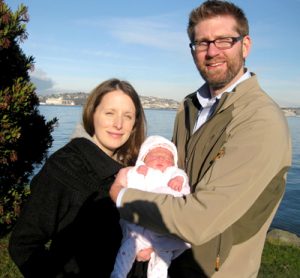 “My contractions began about 1pm 3 days before the due date of 11/21. I wasn’t sure if they were actual contractions or not as I hadn’t had any signs up until that point but it was a new pain I hadn’t experienced yet. We decided to take a walk and eat some Pho with as much Sriracha sauce as I could stand to see if we could get things moving. By 4 pm my contractions were 10 mins apart and from 7:30-9:30, I was averaging 5-7 minutes apart. We called our Doula and told her to head over. The weather was pretty awful that night, 60 mph winds and downpouring rain. I knew we had a trek from Ballard to the birth center in Kirkland so I was antsy to get going. Shaun’s sister Sandy got on the road from Eugene, OR about 7:30 and was so afraid she’d miss the birth. Around 9:30, we called the midwife back and she listened to a few of my contractions over the phone, she agreed we should hit the road so we called the Doula and told her to just meet us there.

Thankfully I-5 was clear and so was 520, we made it there in record time and I used the windshield wipers as my rhythm so Shaun could focus on driving in the bad weather. As soon as I walked in the door all I wanted was to get in that tub but the midwives had to check me first. I was about 4 cm’s dilated at that point so I got in the tub. We had a large group for the birth, my midwife Lynn with her student and assistant, my Doula Megan and her student Doula Robin (who is also a massage therapist), my sister-in-law Sandy (yep she made it! 4.5 hours flat) and of course Shaun who was there every step of the way encouraging me on, pressing on my back and keeping my going. It worked out well to have such a large group as I had back labor the entire time. They tag teamed off all night with 1-2 people pressing on my back at all times, everyone was able to get in about a 30 minute nap so they could re-energize and start pressing on my back again, I think everyone has carpal tunnel from having to press so hard on my back for so many hours. I kept saying press higher, press lower, press on the sides, and as they switched off, I rarely had any idea of who was actually back their pressing, I just called everyone Shaun.

I had contractions until 7:30 the next morning (with hiccups almost every time after they ended) with a few little dozes between contractions while I was in the tub. I kept my pace by repeating Da, Da, Da or Na, Na, Na over and over through them just on reflex. They kept me moving around a lot so my labor wouldn’t stall. Several rounds in various positions in the tub (squatting with my head resting on the side), sitting backwards on the toilet so someone could press on my back, birthing stool, laying in bed frog position and on my side with one leg being held up. I was so wiped out from having vomited several times that standing or squatting was not an option, my Doula kept feeding me Luna Bars, Peanuts and dried fruit but most of it kept coming back up. They kept me drinking electrolyte water and Emergen-C water to keep my energy level going. I pushed for a little over 3 hours before Daphne arrived, she apparently had both hands flat on her face (just like in the movie Home Alone) and her elbows had been pressing into my back the whole time (she had little hand marks on her face when she was born). When her head finally emerged the midwife reached down and removed the cord from her neck, she said she could feel eight little fingers wiggling back at her. She immediately went to my belly and we let the cord continue pulsing until it was finished. She passed Meconium during the birth so she was very dark when she first emerged with a full head of dark hair. She immediately pinked up and waited a bit before she gave out a few cries. Since I was able to get my anemia 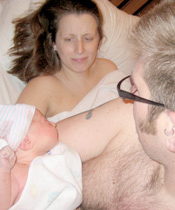 under control in the final weeks the midwives decided not to give me a pitocin injection before delivering the placenta. It delivered about 15 minutes later with no issues. I had a small tear and they decided it didn’t need stitches but I’ve been on bed rest for a week to make sure everything heals up appropriately (I think Shaun is about ready for his indentured servitude to end). Shaun got to hold her once the cord was cut (Sandy got the honor of cutting the cord) and the skin to skin contact kept her super warm and cozy. About an hour later she was weighed, got her vitamin K shot and eye drops and we headed home around 2:30 pm.

Daphne Elizabeth Hendrika was born at 11:10 am on 11/19/09, 8 lbs 10 oz, 21 inches long (she will definitely be tall like her daddy). She’s been really easy to read; she cries when she is wet, cold or hungry and is pretty laid back the rest of the time. Breastfeeding has been pretty challenging this week, but we are both finally getting the hang of it and seem to be on the right track now.

We are so happy she is here and that the all natural birth experience was a happy one with no regrets and thankfully no necessary interventions.