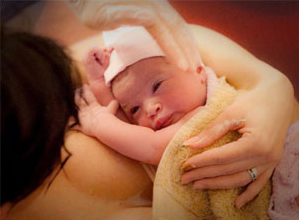 After spending the first 6 ½ months of my pregnancy traveling for several countries, we decided with my husband Patricio, to settle once again in Seattle, the city that we adopted as our home from 2003 to 2007. Today I am more than happy to have taken this decision, as in other countries where I had been, I was not allowed to deliver my daughter the way I wanted, which was a natural birth at home, in the water and without medication.

Until the last day of pregnancy I was teaching, together with my husband, classes of Argentine Tango– that is what we do. It was one of those nights that we went home after teaching, when I started having contractions around 11:30 pm, while we were having dinner with our friend Wesley. The contractions were regular, they came every 5 min., and Patricio and Wesley began to joke that the baby would be born that night, something I did not believe because I was eight days ahead for the “estimated due date” . Of course there is a reason why it’s called “estimated”, right? This was my first baby and everyone was telling me that for sure the due date will be delayed, because that’s generally what happens with the first baby, and that my belly still was to “high”… etc.etc. Which today, I do not think any of these things are true.

Our friend decided to go back to his house to sleep just in case he has to come back soon to photograph the birth, (which he did wonderfully), and my husband and I were taking notes of the contractions that instead of going away, became more intense. I was using the breathing and relaxation exercises I learned in the course of “Hypnobirthing” I had taken. These were of vital importance when it came to trust my body and let it do what it was designed to naturally do, which is: give birth.

It was around 3am that Patricio asked me to phone the midwives because he thought that my contractions were still very strong and stable (according to him, my legs were shaking), and it was myself who remained skeptical of the idea that I was in labor.

Anyway, Patricio decided to continue with the preparations and began to fill up the birthing tub with warm water to await the birth of our daughter. It would be 4am when my contractions started to get very irregular and they came every 5, 4, 3 or 2 min., and by times they were overlapping, then my husband, (even though I kept insisting that perhaps they would go away), decided to call the midwives and doula. To our surprise, my midwives were assisting another birth at the same time!

Patricio remained calm and was already preparing to welcome his daughter without any other aid, when the cell phone rings again and my midwives tell us that in 30 min. they will arrive home.

At this point I felt a strong desire of getting into the birthing pool, so, I did. Automatically my contractions became much softer with the warm water that served as a natural anesthesia for my body. My midwives, Marion and Lynn, arrived at 5:30 am.

Lynn asked me if I wanted her to check my cervix to see how dilated I was, but being afraid of getting disappointed, I refused to be checked. They decided to try to get some sleep, because they had spent the whole night without sleeping with the other birth they were attending. But to their surprise, this birth was going to be very fast, and would not give them time to sleep at all … Around 6:15 am I started to feel a totally different type of contractions, I felt like I had to go to the restroom to poop, but pretty soon I realized that I was wrong, and the pooping feeling actually was that I had begun to push, so I decided to leave the toilet because I was afraid that my daughter will be born right there! When I returned to the living room where the birthing pool was, my midwife wanted to look if I was fully dilated to start pushing, and as she was checking, I had a very strong contraction which followed by some bloody show, and seconds after my bag of water broke. So, Lynn said with a smile on her face: I don’t need to check any further…

After checking that the amniotic fluid didn’t have meconium, I got into the pool and kept on having contractions, which became much smoother once again being in the warm water. My doula David, arrived around 6:45 am, since he lived far away.

A few minutes before the baby was born, Patricio jumped into the pool with me, and positioned himself sitting behind me to give me support. 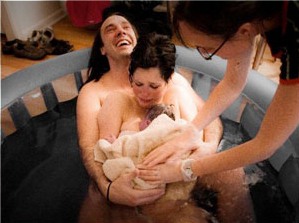 At 7:34 am our beautiful Anuk was born… was the most amazing thing that has happened in our lives … we were overwhelmed by emotions, and between tears and laughter, Anuk was received in the most natural and respectful environment that every baby deserves.

My midwives let us enjoy this unique moment without rushing anything. The umbilical cord stopped pulsating before it was cut, and I had been given the time to nurse my baby before making measurements and checks, during which Anuk behaved very calmly because she was treated with love and gentleness. I’m extremely happy for my choice of choosing a home birth rather than a hospital one. I wish that this was the most common practice, and that hospitals were only used for occasions where we really need them…