Our estimated Due Date was December 20, 2007. At 37 weeks, our midwives reported to us that I was 2 cm dilated and 50% effaced. We opted to do a membrane sweep at my 37 week and 38 week appointments. Our due date of December 20th came and went. On December 22nd, Mindi and I went to the mall (despite the crowds) to walk. I enjoyed the amusing looks that I got from people that noticed my big belly. After walking around in the mall, we decided to get dinner at a new Vietnamese restaurant that had just opened. It ended up being a really nice restaurant with live music. It was a wonderful place for what was to be our last romantic night alone as a couple. We arrived home at about 8pm. We relaxed in front of our computers. I noticed some Braxton Hicks contractions and started timing them. They were strong for Braxton Hicks contractions and they were coming around every six minutes. They radiated slightly to my back and I told Mindi about them. She got a big smile on her face, but I told her not to get too excited; that since I was a first timer, my labor would probably take at least 24 hours.

We decided to hit the sack early, knowing that the baby might come the next day or next night. I woke up at 7am the next morning to pee. I went to the bathroom in the dark and peed. I wiped, but “peed” again unexpectedly. I went back to bed and lay with Mindi for a bit. Shortly after I laid back down, I felt a trickle. I went back to the bathroom and flipped on the light. I wiped again- bloody show. My water had broken and the fluid was scant but clear. I went back to the bedroom and reported my findings to Mindi. We were both too excited to go back to sleep. I called the midwife just to let her know that my water had broken and we decided to go to the grocery store for some last minute snacks for the birth attendants and ourselves. We believed that it would be quite a while of “watch and wait” before the baby would come.

My contractions progressed steadily. We timed them for about 1 hour, looking for the telltale “4-1-1” or, contractions lasting at least 1 minute each, no more than 4 minutes apart, for 1 hour. The contractions were almost all over 60 seconds, ranging from 2.5 minutes to 4.5 minutes in between. I was coping well with the contractions, pacing around in between rooms while swaying, breathing deeply and moaning. Mindi was doing a great job timing the contractions and supporting me physically when I needed it. It was soothing to “slow dance” with her during some of the contractions. At this point, I was just going with the flow. I was not frantic or panicky, which was great. When the numbers were aligning for “4-1-1” Mindi called one of the midwives. I had begun to have some tears during a few of the contractions. The midwife asked Mindi to put me on the phone. She handed the phone to me and the midwife asked how I was feeling. I explained the intensity of the contractions to her and said that I believed that it was a good time for her to make her way to the house. She told me that I sounded too calm in between my contractions; that I was “still in a good mood”, and told me to wait to have her come until I was “in the zone”- meaning, the contractions were my only focus. I accepted that request and we hung up. That was 12:50pm. About 40 minutes later, I decided that I need to call my doula. She arrived at 2pm.

The contractions were coming strong and hard. Mindi was still timing them. They were consistently 2 minutes and 20 seconds apart, (and had been that way for about 40 minutes) lasting about 90 seconds. As soon as the doula showed up, Mindi began filling the inflatable labor tub with water. The doula was great- she followed me around and applied counter pressure to my low back and sacrum whenever I would stop walking and lean on a wall. I was moaning deeply and breathing heavily. 5 minutes later I was climbing into the pool. I was slightly afraid to get in because I was feeling pressure to move my bowels, and I did not want to do it in the pool…

The water in the pool felt great. I was on all fours, and the Doula was again applying counter pressure to my sacrum. Mindi was at my head with a cold washcloth, speaking softly to me during the contractions. After about 2 contractions, Mindi asked me “are you feeling pushy?”- I responded with “I don’t think so”. When the next 2 contractions came, I heard mindi saying to the doula “Is she pushing? I think she is pushing. Lynn, are you pushing?”. “I don’t know” was my response. I was shaking at this point. Mindi looked up at the doula and said “She is pushing, I am calling the midwife!” Mindi called one of the midwives at 2:26pm. She was trying to be calm and said “Lynn is feeling a lot of pressure, I think you should come NOW“. The midwife said that they were on their way. By 3:22pm the midwives still were not at the house. Mindi called the midwives again “I think she is pushing- where are you???” They said they were almost there.

Mindi was doing great- afterwards, I found out she was totally freaking out inside, but every time she was by my side she was acting cool as a cucumber which really helped me keep my wits about me.

The midwives showed up at 3:26pm. I was focusing so intently on my contractions and grunting through the urge to push that I barely noticed the midwives come in. They were both quiet, quickly shuffling through their things for their gloves, etc. heard one of them say “let’s check her”. I never heard the verdict of the check, but Mindi tells me that they quietly concurred that I was indeed, complete and ready to push. Because I did not hear them say anything, I was able to simply listen to my body’s urges, and push when I felt it was time. The only coaching that they did was to remind me to not force the baby out- to just let the baby come slowly as to help prevent tearing. I gave a few test pushes while following my gut. The midwives could tell I was pushing and checked me again. The midwife could see about a half dollar sized portion of the head. I continued to push and could feel the burn of the head crowning slightly. The contraction ended and I decided to take a break. I told Mindi I loved her and told her to reach in and feel the baby’s head, and she could feel the top. Another contraction began and I pushed with my body’s urges. With a big burning sensation, the baby’s head was born. The midwife checked for a cord around the neck and found none. Mindi looked past my back to see our baby’s face. One more contraction and I pushed out the baby’s body. It was harder than I expected it would be- almost as much work as birthing the head. Our baby was born at 3:57pm. Our doula announced the sex – it’s a boy! The midwives passed our baby between my legs after I stood up. The cord was a little short and so I sat back down in the water and cradled our little boy. After the cord was done pulsing, it was clamped by the midwives and cut by Mindi. Mindi had the most beautiful smile on her face.
The midwives helped me out of the pool, trembling from the adrenaline. I squatted over a bowl and delivered the placenta. It was quite an odd sensation after having just delivered the baby- it felt like a soft, squishy version of the head- (without the burning). I laid down on the bed with mindi. Mindi laid skin to skin with our little boy while the midwives assessed my “damages”. I had 1 second degree tear which the midwives took care in stitching. 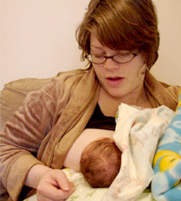 Giving birth in my home was the most wonderful experience. The whole time I was being stitched, all I could talk about was how wonderful it was to be in my own house, not attached to any IVs or monitors, not feeling vulnerable with strangers and student aids and shift changes interrupting everything. Being able to have my baby cared for and assessed all within my view or in my arms, and not having to deal with bright lights and paper bed linens. It was such a loving atmosphere. This, coupled with the fact that my labor was speedy, but never too fast that I did not feel in control made it an experience that I will never forget, and one that I am eager to repeat.