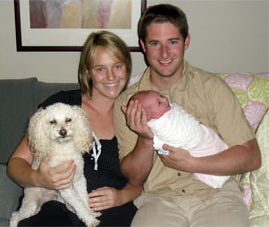 In telling our birth story, it is necessary to start from the beginning, as a birth like ours I don’t think would be possible without the right preparation. Besides the constant reading, our midwives, our doula and our birth class were like armor going into battle.

Around week 18 of my pregnancy, I made the decision to have a natural, midwife attended birth, with the support of my partner, Torrey. I decided on Rainy City Midwifery easily. I went in for a consult and just knew. This was the place I wanted to get my prenatal care, one of these women was the woman who would help deliver my baby. My prenatal care was personal, warm, caring and focused on me. This did so much for my confidence in my ability to birth naturally.

Through Rainy City, we were referred to a top-notch doula and out of hospital birth class. The support and preparation we received from both were more important than words can express.

So, as I approached my due date, I was pumped! I had a moment a few days before when I cried for no apparent reason and just said out loud “I just want my baby to come!” I knew then it was time. That was Wednesday night, September 15. Hannah was due September 18.

September 17, I began having slight pain with my Braxton Hicks contractions, and frantically spent the day nesting and preparing for the birth. At the grocery store, people kept asking me when I was due, and it was pretty fun to be able to say “tomorrow.” One woman asked what I was doing that weekend. “Having a baby,” I replied. It’s not every day you get to say that! I think I intuitively knew it was go time. That night, as we were watching a movie, the contractions got more intense. At the time, I thought I was in prelabor. I tried to go to bed, and then spent the whole night awake making pink cupcakes, journaling by candlelight, darkening the condo and in retrospect kind of keeping watch and guarding our birth space like a mother bear. I told Torrey to sleep, and that I’d tell him if I needed him.

I think I now know that this was early labor. I was already dilated 2cm and 75% effaced going in. I BELIEVE active labor started around 8am, when I felt like I needed some help coping, and started getting a little cranky.

Contractions were getting more intense, but had no discernable pattern. Cheryl, our doula, told me that we needed to take a walk. Most of the day, I coped with contractions on my own, with Torrey just there with me. We relaxed and watched movies with our beloved miniature poodle, who would become a sort of secondary doula as we had our baby. The contractions often took me by surprise, and I coped by bracing myself and rocking in place wherever I happened to be. The birth ball was worth its weight in gold. Because I was able to cope on my own, I just knew it wasn’t quite the real thing yet. Silly me.

One glass of white wine later, I got about a 15 minute break, and then my contractions got longer, stronger and closer together. Still, there was this weird pattern of long, intense contractions with little “after shocks” in between, the big ones spaced pretty far apart. My mom had just gotten into town and stopped by to say hi. She found me moaning and rocking on the birth ball on my knees and wondered why our birth team wasn’t there yet. Having been there and done that, she was pretty sure it was time.

Cheryl came over shortly thereafter, at about 4:30pm, got her tub set up, and settled right in with Torrey helping me cope with contractions. They were quite the dynamic duo!

To get my contractions into a more regular pattern, Cheryl had me get in the birth tub. The water was amazing. Things were pretty calm at this point, so Torrey went to stock up on Gatorade while us ladies timed my contractions. When he got home to a dark condo, me moaning in the tub and Cheryl behind me using counterpressure, he realized it was time for action.

Shortly after that, I started feeling pressure in my butt, and my contractions were over a minute long and about 2-3 minutes apart. We called Beth back, and she came over at about 8:30pm with Marion, a student midwife. As they got set up, I continued using rhythm, ritual and relaxation to get through each contraction.

My yoga practice was huge in helping me cope. Cheryl even caught me smiling during a contraction, something I learned to do in tough poses. (I can just hear my yoga teacher saying “okay, now SMILE in the bind!”). Yoga taught me not to run from discomfort, but to be present with it and allow it to run its course. I knew each contraction would be relatively short, and I’d get a break, so I took it one contraction at a time, inviting the intensity in, visualizing our baby making her way out into the world.

Still, between contractions, I was “way with it,” as Beth put it. She decided to check my cervix, thinking I couldn’t be too far along, judging by my with-it-ness. The plan was to help me get some rest, and we were all assuming I was about 4-5 cm. I moved from the comfort of the birth ball to the bed for a quick exam.

So this is the fun part. I was 10 centimeters already! This was surreal to us all. Torrey and I were left alone in the bedroom for a few minutes to process. We were about to have our baby! I had gotten through transition and not even realized it! I was amazed and oh so grateful. There was still a little work to be done before really active pushing could begin. The mood was calm and relaxed – frequent checks revealed that Hannah’s heart rate was strong, and we listened to Dave Matthews and Bob Dylan by candlelight as I continued to labor. I was genuinely enjoying everyone’s company in the comfort of our home – just with frequent pauses during contractions. Our poodle was increasingly protective of me, which was pretty adorable!

My water still hadn’t broken, so after a bit more laboring – which was getting way intense at this point – they broke it for me to speed things along. I dreaded the contractions getting more intense and closer together, but wanted my Hannah in my arms, so I went along with it.

That was a game changer, because indeed everything got more intense. Shortly thereafter, I started pushing, moving between the bed, the birth stool, and the tub. This was the point where I dug into this part of myself I didn’t know existed. Raw power and ferocity are a few words that come to mind. I remember Beth telling me “you rock, Suzanne!” and “come on Suzanne, push your baby out”, words that added to my determination. It was amazing, and it was in those midnight hours that I became a new woman. I became a mother, obviously, but I also became a stronger, more resolute woman, a more confident woman, and a woman who honors and celebrates every part of herself – including the stretch marks left by this awesome transition into motherhood.

I really wanted to have her in the water, but I started bleeding pretty heavily, so to keep an eye on it, I had to push her out on the bed. We knew Hannah was doing great by her strong, steady heart rate. This has ended up being really cool to me – she was conceived and born on the same bed. The amazing work of Beth was that I had no idea I was bleeding and simply followed her lead when she calmly said “okay, it’s time for this baby to be born, and I need you to move to the bed to push her out.” I trusted her completely, and didn’t even have an urge to insist on a water birth.

Once on the bed, I found another power surge and felt a real sense of urgency to get my baby out. I was amazed by how hard I could push after hours of this grueling work. When I felt the ring of fire , I was so excited because I knew she was moments away! I gave a few more really powerful pushes that I thought might kill me. Torrey had been in the tub with me, and as I was crowning, came back into the bedroom after changing out of his swimsuit. Now, this is a man who was very verbal about his squeamishness around birth. Once he was surprised by the sight of our baby’s head peeking out, he surrendered. I was so proud of him. 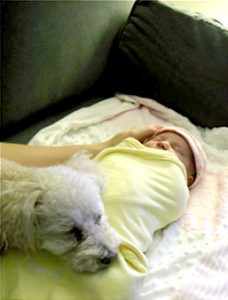 I could see her head start to emerge in the mirrored closet doors at the foot of our bed, and the minute she came out, she screamed – the best sound I’ve ever heard in my life! She was born at 1:09 am. She was placed immediately on my chest. Words cannot describe the rush of joy and love that I experienced, and it is that rush that sealed my belief in natural birth. The uninterrupted surge of oxytocin, the “love hormone”, was like nothing I have ever felt. The pain and all memory of it were just gone, immediately. It’s true that delivery of the placenta and the cruel uterine massage that follows are like they’re not even happening when your baby is lying on your chest for the first time. At this point, I was also given a shot of pitocins to stop my bleeding, another unpleasant experience I was mostly unaware of. We were amazed by how she made eye contact with us and immediately started searching for the breast instinctively! Torrey cut the umbilical cord and took part in her newborn exam while Beth helped get me cleaned up. Hannah weighed in at 8 lbs. 4 oz., was 21 inches long, and her head was 13 inches around.

Our birth team stuck around for a few hours, and left at about 3:30 am, at which point we sat in the living room with our babe and marveled at what had just happened. What a night! I am so happy with our choice to have Hannah at home. Being on our turf was empowering and comforting, and in the care of such expert, knowledgeable professionals, I never for a second doubted my safety or that of our baby. I believe I was more at ease and able to open up as I needed to than I would have been in a hospital. Being coached and supported and cared for by such amazing women was truly inspiring. Anyone who saw it could never deny a woman’s strength and courage! We have a sense of pride and ownership over our birth, and will be forever impacted by the uniqueness of our adventure into parenthood. I know, having had the privilege of giving birth naturally, that there is literally nothing I cannot do.